PyDev is a plugin that enables Eclipse for Python development. It adds the features to Eclipse for Python language which includes Code Completion, Code Analysis, Debugger, Interactive Console, Refactoring, Tokens Browser, Django Integration, etc. The main advantage of installing PyDev plugin is that it can be installed on the pre-installed Eclipse that is already available on the system. We can also do a fresh install of Eclipse as shown in this tutorial.

You might also be interested in Python Cheatsheet to learn or brush up the basics of Python.

Open the Eclipse packages Download Page and scroll down to Eclipse IDE for Web and JavaScript Developers as highlighted in Fig 1. 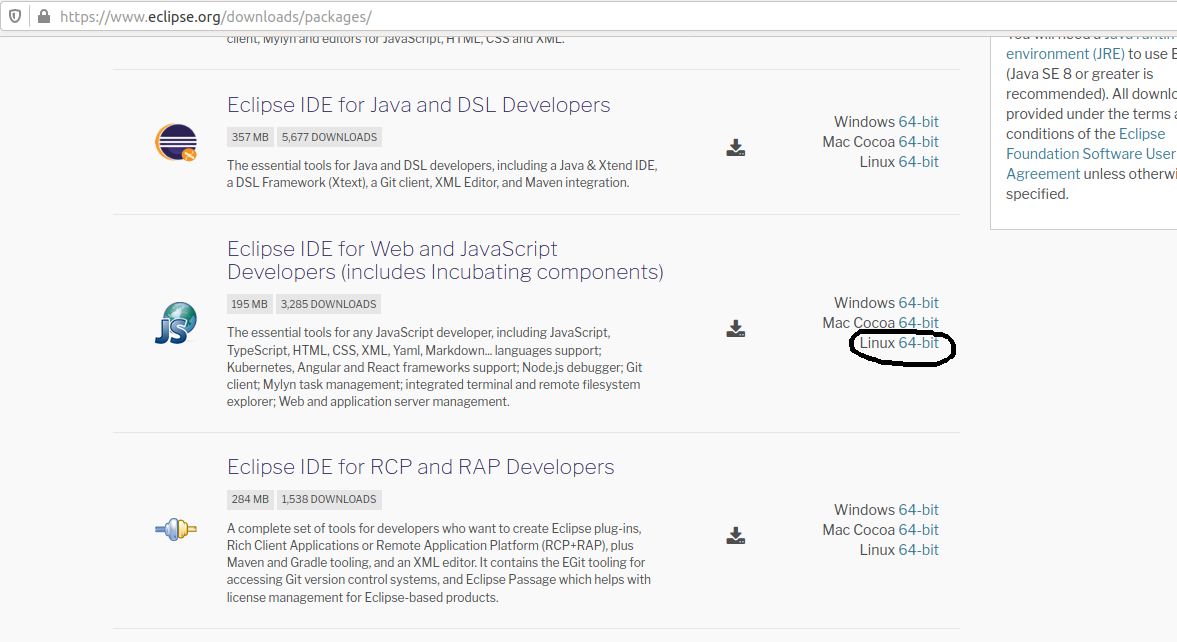 Click on the Linux 64-bit link as highlighted in Fig 1. It will navigate to the download page as shown in Fig 2. 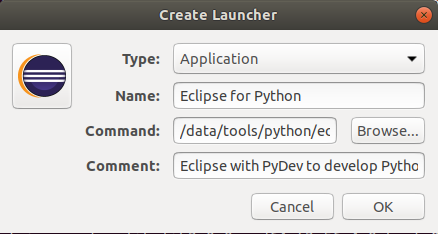 Keep the checkbox unchecked as highlighted in Fig 5. It will show the workspace selection wizard every time we launch the Eclipse IDE. After providing an appropriate workspace location, click on the Launch Button to start Eclipse. It will show the Welcome Screen as shown in Fig 6. 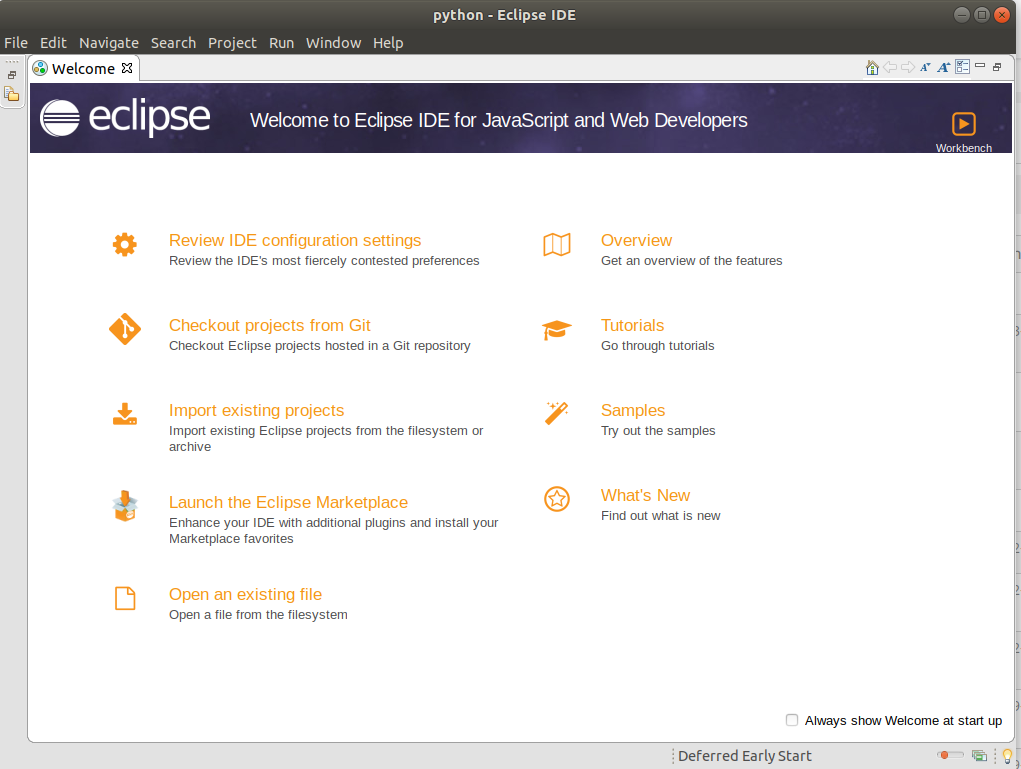 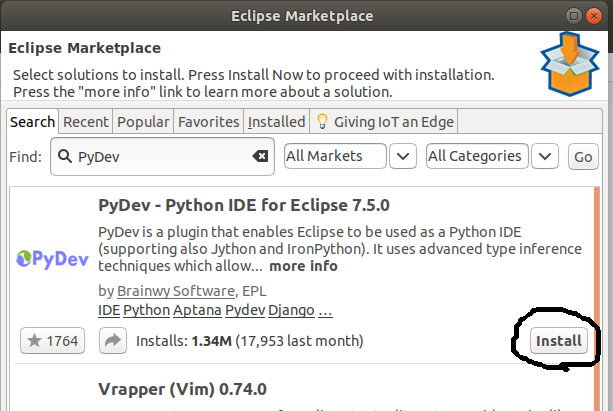 Click the Install Button to start installing the PyDev plugin for Eclipse. It will fetch the details of the plugin from the marketplace and shows the available options as shown in Fig 8. 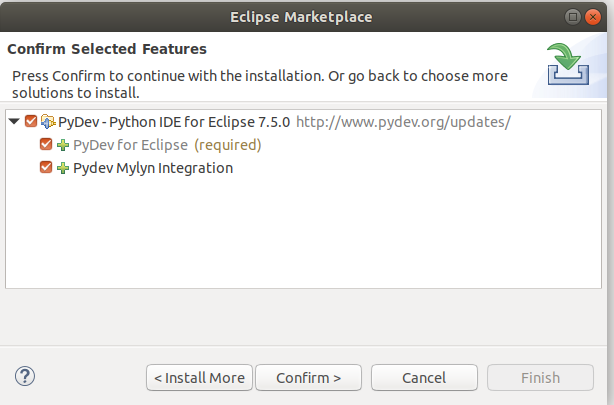 Click the Confirm Button to confirm the plugin installation. On the next window, it will ask to accept the License Agreement as shown in Fig 9.

Click on the Finish Button to complete the installation of the PyDev plugin for Eclipse. In the end, it will also ask to restart the IDE.

In this step, we will create our first Python Project using eclipse and create the first program to print Hello World on the console. 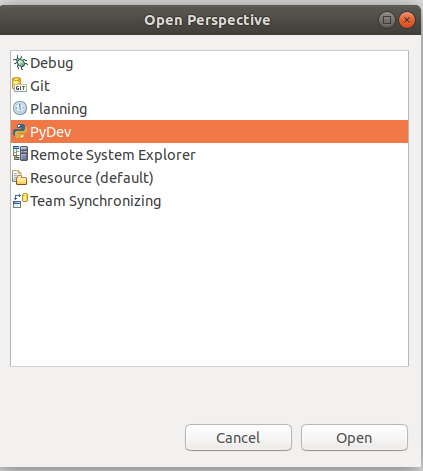 Choose the PyDev perspective and click on the Open Button to open the perspective. The default Python Perspective is shown in Fig 11. 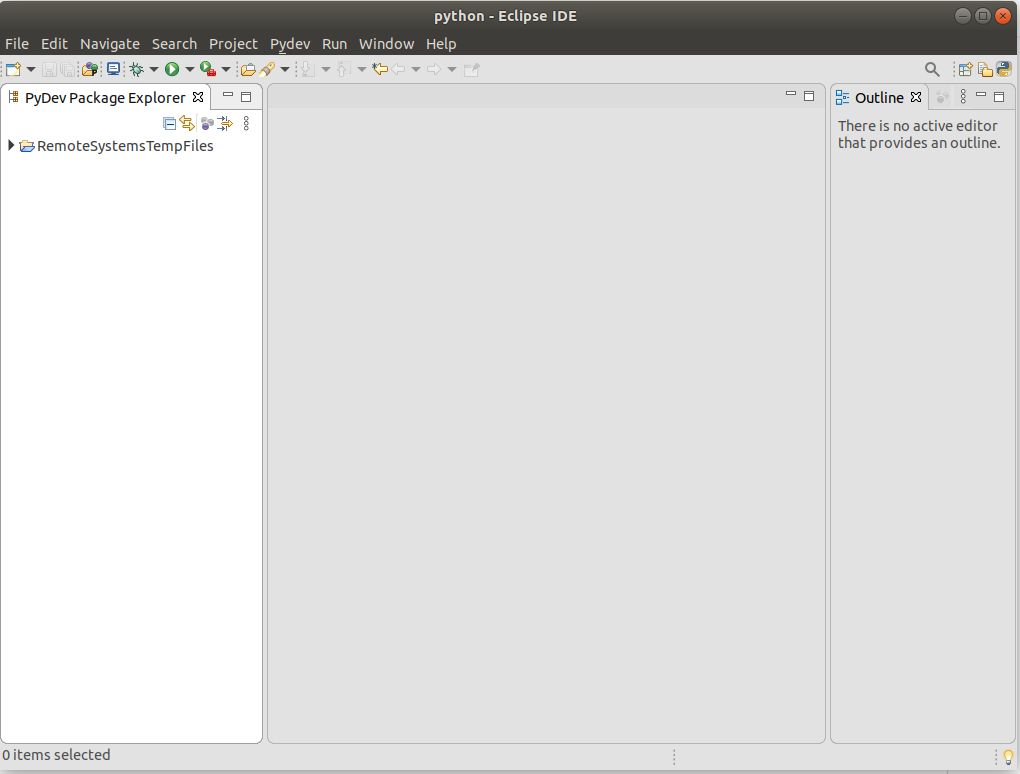 With the PyDev perspective open, we will create the first Python project. Click on File -> New -> PyDev Project to start creating the project. The next wizard shows the options to configure the Project as shown in Fig 12. 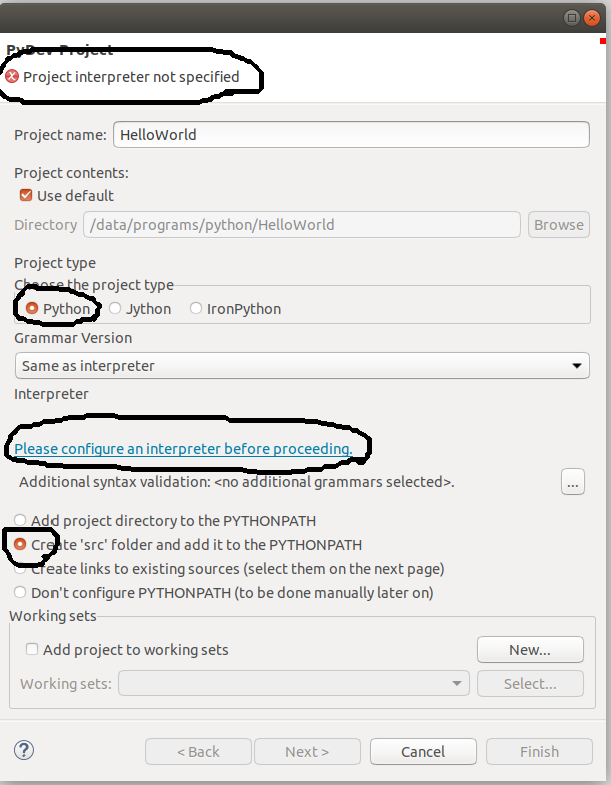 We can see that the project configuration wizard shows a link to configure the Python interpreter. Now click the highlighted link to start configuring the interpreter. It will show the available options as shown in Fig 13. 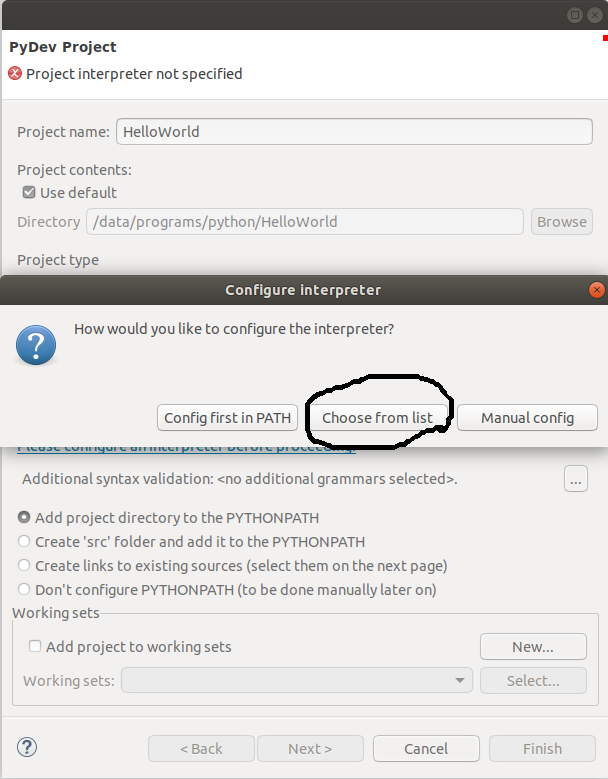 Choose the appropriate interpreter and click the Ok Button. It will also ask to configure the python path as shown in Fig 15. 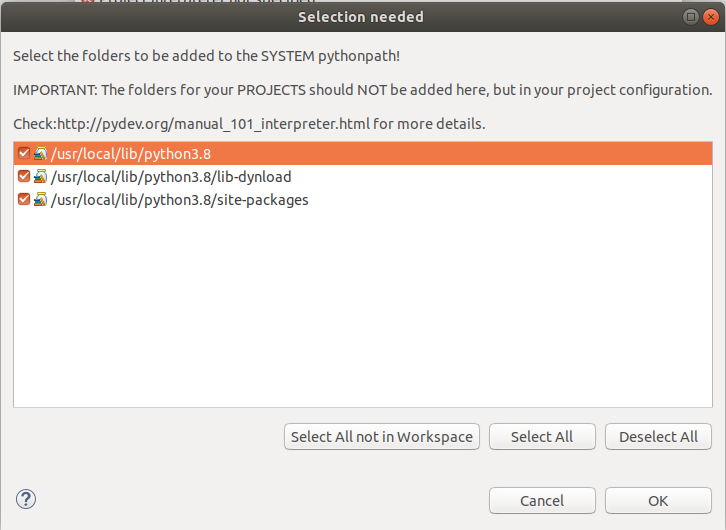 Keep the paths selected and click the OK Button. It will configure the interpreter and shows the Default interpreter selected for the project as shown in 16. It will also ask for system permission to allow Eclipse to make required changes as shown in Fig 16. 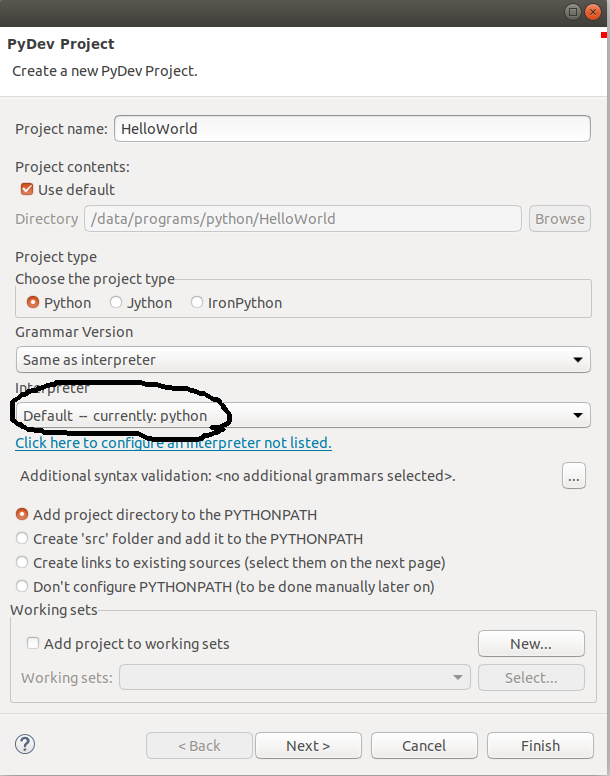 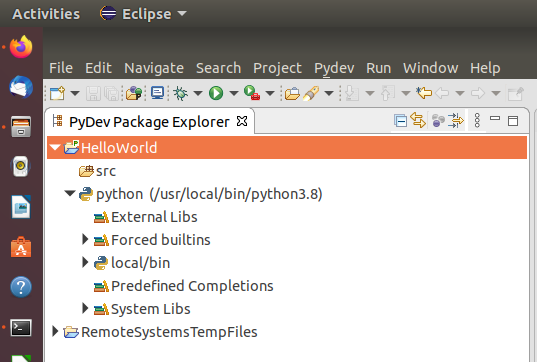 Now right-click on Src and click New -> PyDev Package and provide an appropriate package name. Click the Finish Button to create the package. 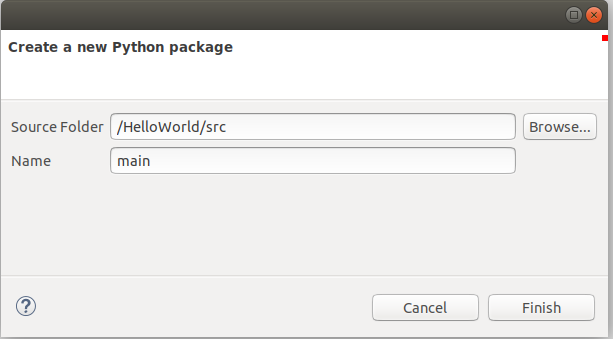 It will ask to confirm PyDev preferences for the first time as shown in Fig 19. 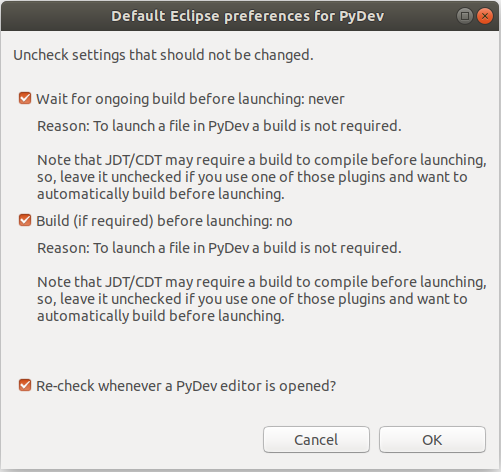 Click the Ok Button to confirm the preferences. We can change them later if required. It will create the Regular Package and also creates the corresponding __init__.py as shown in Fig 20.

Now we will create our first Python Module to print Hello World on the console. Keep the package selected and right-click -> New -> PyDev Module to start creating the Module. It will show the wizard to configure the Module as shown in Fig 21. 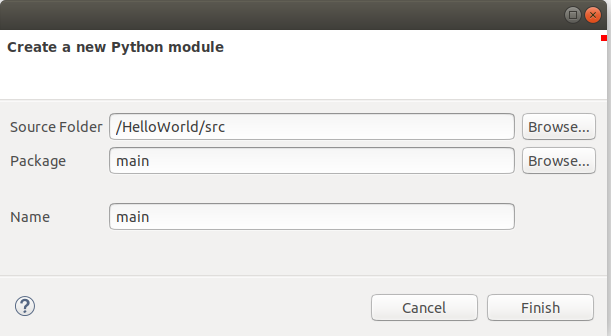 Now provide the appropriate Module name and click the Finish Button to create the module. It will also ask to choose the module template as shown in Fig 22. 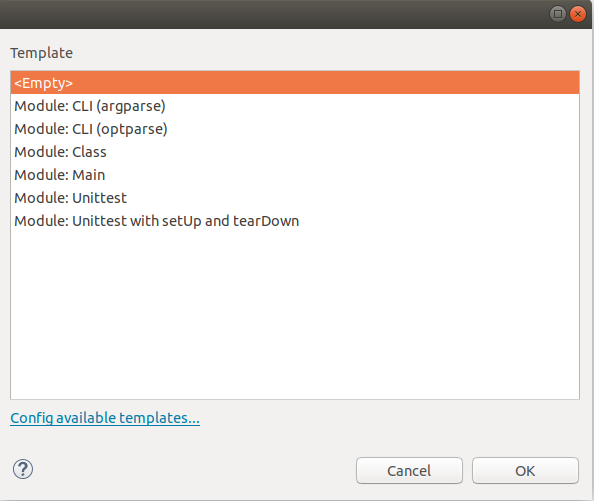 I have selected the Empty Template for this tutorial to keep it simple. Click the OK Button to configure the module template. It will create the module using the empty template as shown in Fig 23.

Now update the module to print Hello World as shown in Fig 24. 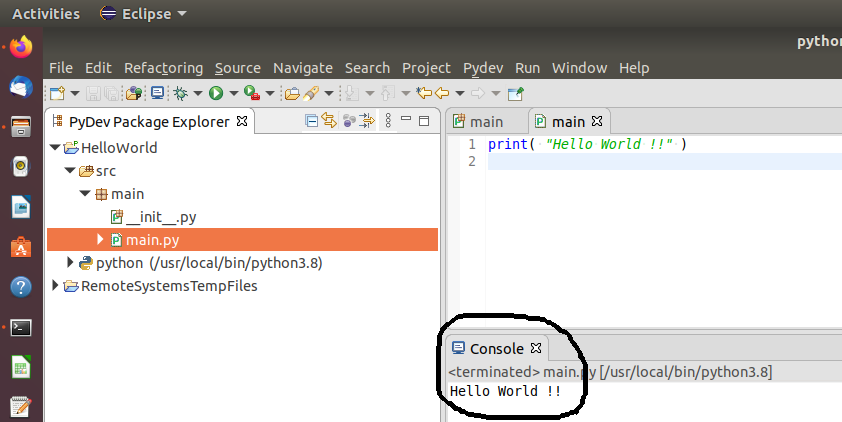